I played in Joe Louis in a playoff game

My predisposition to “just going with it” has led me somehow to, through a series of 23% understood entirely-Japanese conversations with the principal of the night school I work at on Wednesday nights, register Jessica and I for a volunteer, 250-person chorus that we must attend practices for ten times between now and December. It culminates in a December 8th concert at a music hall in neighboring Akashi, where I will, surrounded by legions of middle-aged Japanese men likely possessing far greater vocal ability than I (though their karaoke skills are no indication), sing Beethoven songs for the locals while wearing a black suit. This might sound enjoyable if I had ever been a part of any choir in my post-fifth-grade life, or even enjoyed singing when not completely inebriated. According to Google’s automatic translation of the event page, we are to be the “protect food Jiro response rate” chorus.

While I filled out the papers, trying my hardest to conjure up the Japanese necessary to say I really couldn’t do it, or anything whatsoever, I had to mark whether I was a tenor or a bass, a point of self-knowledge I do not even slightly possess. Principal marked bass for me because he said “it sounds like this” and then sang “la la la la” and then marked it. There is a seventy dollar entry fee! Ostensibly it covers the costs of some big party we have or something, but I couldn’t figure out when the party is. We also get a CD and some sheet music or whatever, I don’t know how this shit works. I can’t even read the damned paper. I guess I’m supposed to go to this place on the map next Thursday after work. Someone might call me or something? It’s on the second floor of a building in a place I’ve never been. Jessy will be off to goddamned Australia so I will be going it alone the first week.

It’s getting to be summer which means it’s time for that annual tradition of “Cool Biz,” the guilt-mandated effort to wear dorky short-sleeved dress shirts with no ties or jackets so that we can keep the air conditioner barely running and sweat to death in the name of conserving energy for our soon-to-be-powerless country that has no nuclear reactors running. Another thing that it means is that it’s time for seasonal Pepsi, and this year it’s a doozy! “Salty Watermelon Pepsi,” which releases July 24th. Signs you’re in Japan: a soda release date is announced almost two months in advance of the product launch, and it finds immediate coverage all over the news.

I’ve been playing a game lately on my home video game console called Yakuza 4. It’s kind of a open-world game that takes place in Tokyo, and you play as some hardass and you run around and do minigames. I spent probably four hours last night doing a minigame that isn’t even really a game, where you click some buttons to set a training regimen for your virtual dojo’s virtual recruit, and his stats go up, and then you enter him in tournaments and he fights, only you don’t even get to fight with him you just WATCH HIM. But for some reason I couldn’t stop. Before I knew it it was like the old days, hammering away at the button to make the number go up, but why, why?!

It reminded me of my first experience in life where I was fully able to rationally recognize I had “wasted time.” It was when I was maybe ten years old or so and I had rented Bill Laimbeer’s Combat Basketball for Super Nintendo. I got it home and spent all day playing. After a while I had figured out how to break the game, just had to keep grinding away. I think I needed $3 million to buy Bill Laimbeer himself. The whole time I remember some of my family was there, they were playing in the other room or watching a movie or whatever, and I was like “hey sounds fun but the job has to be done,” and so I kept playing to get money to buy Bill Laimbeer. Hours passed! Hours! Playing Bill Laimbeer’s Combat Basketball! And then, eventually, I got the money to buy him. Oh! How sweet it was gonna be. I bought up that old white turd and stuck him in the fuckin’ game, he sure was the best player. And then I went out to check the other room and see what fun everyone was having, but it was too late. It was time for them to GO HOME. I ground the gears for a second. “What have I been doing with my life? All this shit for Bill Laimbeer?” I suddenly realized the ultimate futility of my actions, of the actions of humanity as a goal, in microcosmic space: burning my life away doing the same thing over and over to get three million dollars so I could buy Bill Laimbeer. Obviously I learned my lesson and never spent time on video games again. 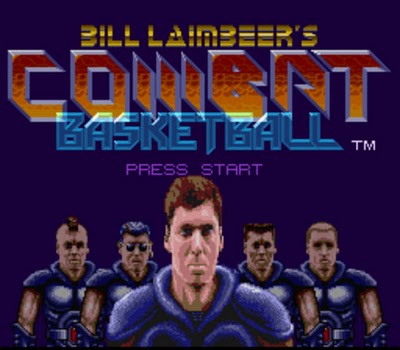 Look at that piece of shit!

CURIOUS JAPANESE THINGS OF THE WHAT
– Today’s beverage of choice, which has for reasons I will never fully comprehend, become a totally normally-named grapefruit-tasting drink to me, called “POCARI SWEAT”
– The lady who called me on the phone last night and said like “hi mister ryota ishikawa” and I was like “that’s not me chigaimasu chigaimasu” and she was like “oh that’s not you” and I was like “nope not” and she was like “well do you have a minute to talk about insurance” and I was like “aha excuse me” and I hung up even though we don’t really “hang up” anymore we just push a button and it isn’t even a button anymore just a picture on a screen that says “end call”
– The lesson I’m currently teaching on Japanese haiku and English haiku and how we can use the haiku form to make English poems, during which I write a haiku poem in Japanese on the board to explain it and then someone points out that I should have made this one line before the other one in stroke order even though I don’t bother to point out that when they say “I like to watch birds frying” it doesn’t mean what they think it means
what what

The other day in front of the elevators some young kids were waving these wands around to make big bubbles and then running away, leaving them suspended in the air. A lady and I happened to cross paths where the bubbles floated, and for some reason both of us stopped right there in the middle of the sidewalk, separated by this wall of shiny orbs, wondering if it really was safe to just walk right through and pop the bubbles, these temporary little things with no feelings or emotions that took less than a second to create. I walked around the side, on the grass, to avoid the bubbles, wondering for a second how many little bugs I was stomping to death in the name of beauty! A perilous existence up here in me.