A good imagination and a pile of dung

When I am out on Hanshin line along the bay and we bust outta the tunnel and I see the sun over the water on my way to blind school, I sometimes start thinking about dog shit. Because I know I’ll run into it, and all it entails, very soon. I get it, dog owners, sometimes you’re walking your dog and it just blows a hollow point load into the concrete, it just went off officer yes I have a permit, but you don’t have your little doggy crap bags or whatever you use to pick up its hot log so you just leave it there. Do you know who you piss off? The little old lady (or guy but I prefer to imagine it is a lady!) who leaves these fucking things next to the shit! 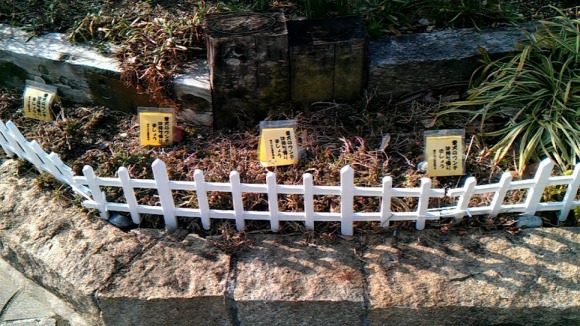 Yes, you can be of limited vision and still notice the variety of yellow, laminated triangular cards peppering the Takinochaya park on Thursday morning, quaintly placed near dog wads of assorted vintage, for your convenience. The text on the cards says something like “Let’s all pick up our dog poopy.” They are perhaps the most perfect example of non-confrontational Japanese passive-aggressiveness that I can specifically cite with photos. There are a few layers of amusement here, starting with the most obvious, I guess, that obviously this gal at some point lost her tenuous foothold on sanity and decided once and for all that she would put a stop to all this dog wad lying around by “almost doing something about it” that had nothing to do with actually removing the keester cakes from the concrete. Then, she set about not only making the signs, but making multiple signs, which must have involved a computer since they are printed, and involved special yellow paper, and involved lamination, a significant step. These things are goddamned laminated!

I like to imagine her routine, during which she teeters on down to the old park at the crack of dawn to carefully examine the park for any fresh grogans, then plucks her signs from the oldest, most disintegrated growlers and places them on the fresh ones, held steadfast against the elements by nice hefty rocks. “Ah yes,” she reflects. “The park sure looks a lot nicer with all these bright yellow notices pointing out how many lawn sausages we are currently playing host to.”

For me, they serve as a sort of Hollywood star map, pointing out the best places to catch a glimpse of the newest celebrity. I coast past one that marks only the skeletal remains of an amorphous deposit, evokes the memory of a whisper: “I once was, then was again, and now only the spirit persists.” Secretly, I want to waddle over to the hedges and chisel a grunt sculpture for her to discover the next day. It will shake the foundations of her earth, and she will need to print and laminate much larger cards.

CURIOUS JAPANESE THINGS OF THE WEEK
– I recently purchased a beverage which was a soda that claimed to feature an “adult taste” of apples and hops
– In Japan, the Filet-o-Fish at McDonald’s is a breakfast sandwich, which means I can get one with a drink in the morning for the meager sum of 200 yen
– I have not been able to find fucking cauliflower for the last five goddamned days
– Last weekend in Osaka we ate at a brick-oven Italian place with some friends and I got a “large” calzone which was over twenty dollars and had a partially-cooked egg inside it for some reason
– A program on television last night featured “hilarious foreigners” who posted videos of themselves on YouTube in which they are badly singing and playing Japanese anime songs, they were roundly mocked to my amusement and delight
– Found clearance-priced boxes of orzo at the grocery store the other day, it is called “risoni” here and boy I sure am loving it
– There is an advertisement for a video game on the screens in the JR station, it is based off a cartoon and the name of it is “Milky Holmes,” this is totally normal
LIFE GOES ON

As I waited to cross the street on my way to night school today I heard someone to the right of me say “how’s it going,” which is not something I often hear “while mingling in the public sector.” I turned my head to see who it was and it was some guy who looked kind of like the food vendor in Blade Runner. He seemed Asian but was speaking flawless English. He said he lived in Georgia and that he was an “expert in fifteen languages.” He followed me as I walked up the street to school, making intelligent but oddly non-sequitur remarks outside the edges of whatever temporal conversation we happened to be having as I proceeded. He told me he had two hundred and fifty addresses, “just for fun,” and that he couldn’t even remember them, but it was just something you gotta do, have some addresses.

Before we parted he started to say and spell words that were not words, asking if I knew them, like Sngaus and Thahdg, and I said man, I don’t know what that is, and he said you know, the pronunciation of English you gotta teach them students of yours, and I was like yeah, I know. Even now I am not sure if it was real life or a waking dream, an extension of my everdeath, the whims of the swirling winds blowing past my skeletal remains like the aurora borealis, dandelion seeds on the tradewinds caressing my prefrontal cortex like so much fossilized dog ejecta.